The first potent COQ8 inhibitor targets ubiquinone biosynthesis: Inhibition of the COQ8 protein could be beneficial in the treatment of diseases such as cancer. COQ8 is needed for the biosynthesis of coenzyme Q, also known as ubiquinone.

A new collaborative study from the University of Eastern Finland, Washington University in St. Louis, University of Wisconsin–Madison, University of North Carolina at Chapel Hill and the Promega Corporation discloses the discovery and application of a new chemical probe to selectively inhibit human COQ8A in cells. The results were published in Nature Chemical Biology.

Protein kinases are enzymes that catalyse phosphate transfer from adenosine triphosphate (ATP) to tyrosine, threonine or serine residues in specific target proteins. These phosphorylation events occur in almost every signal transduction pathway and provide regulatory points for therapeutic intervention. Kinases have been successfully utilized as drug targets for the past 30 years, with nearly 90 kinase inhibitors approved by the FDA, mostly for the treatment of cancers and inflammatory diseases.

The canonical function of kinases is the phosphorylation, however, nearly 10% of annotated kinases lack enzymatic activity. These pseudo-kinases despite being catalytically inactive, perform numerous non-canonical kinase functions through their inactive ATP binding domain. A sub-family of these pseudo-kinases are the UbiB proteins including the kinase COQ8B and pseudo-kinase COQ8A, the mutations of which are directly tied to multiple human diseases, such as autosomal recessive cerebellar ataxia and steroid-resistant nephrotic syndrome.

To date, the only clear connection between UbiB proteins and biological processes is the requirement of Coq8 for coenzyme Q (CoQ) biosynthesis in yeast cells. The full characterization of Coq8 and other UbiB proteins has been hampered by a lack of potent, selective chemical tools to probe their biological functions. In this new work, the researchers disclose a highly specific potent inhibitor TTP-UNC-CA157, that targets the human COQ8 proteins and is the first small molecule inhibitor of COQ8A or COQ8B to demonstrate effects on their known roles in CoQ biosynthesis in cells.

To identify lead inhibitor compounds, the researchers searched published kinase screening data and found COQ8A as a promising secondary target for 4-anilinoquinolines. Through a series of screening, UNC-CA157 was selected as the most promising lead candidate for further development. During the course of the investigation, the team solved a co-crystal structure of COQ8A bound to UNC-CA157. This structure aided their medicinal chemistry efforts to specifically target this compound to the mitochondrial matrix through the addition of triphenylphosphonium (TPP) to the solvent exposed region of UNC-CA157. They also demonstrated efficacy of the mitochondrial targeted inhibitor in a cellular context, which is key for broader utility within the field.

While cells rely on CoQ biosynthesis for respiration and other metabolic processes, there are potential benefits to inhibition. Limitations to CoQ production through genetic or dietary intervention increase lifespan in Caenorhabditis elegans and mice. CoQ is also used by the oxidoreductase FSP1 to help inhibit cancer cell death, suggesting that cell-specific suppression of CoQ biosynthesis may be an effective anticancer strategy. The small molecule inhibitors developed and characterized in this work provide a starting point for implementation of COQ8 inhibition in these fields and for more comprehensive investigation of their cellular functions and the beginnings of a potential therapeutic strategy. 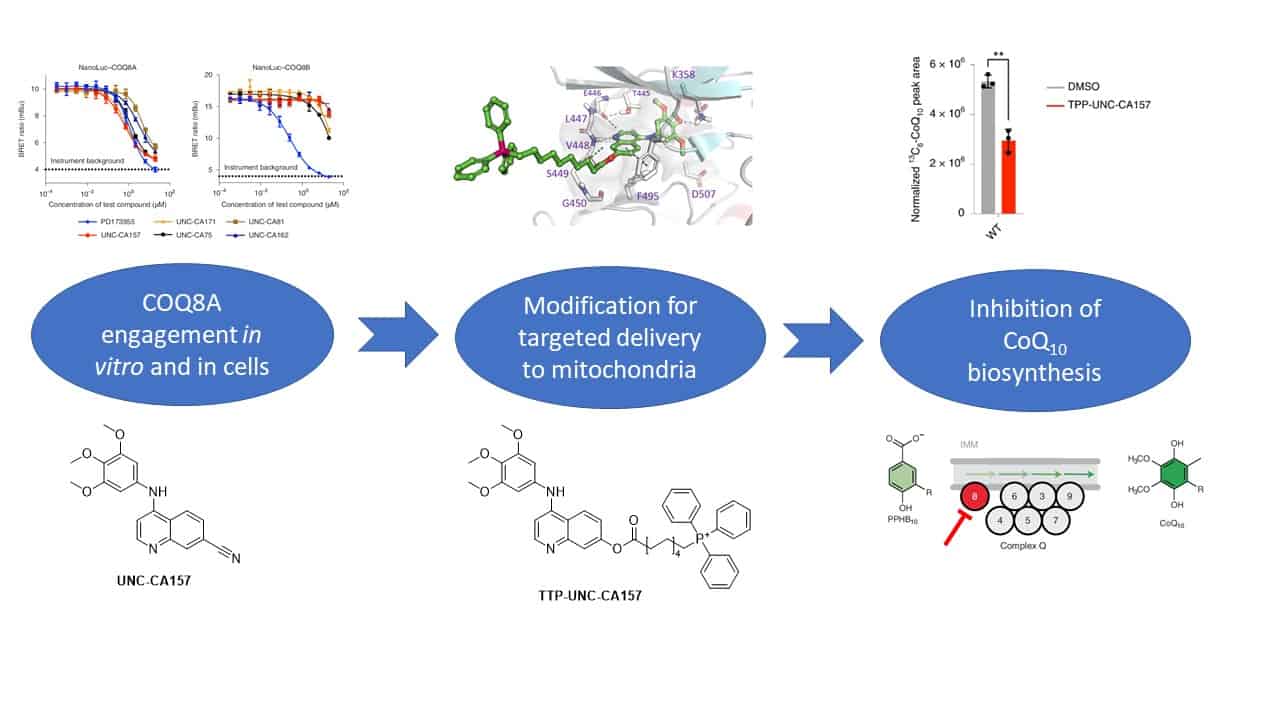