Milk use in prehistoric Europe dated


Pioneering research directly dates the earliest milk use in prehistoric Europe: A new study has shown milk was used by the first farmers from Central Europe in the early Neolithic era around 7,400 years ago, advancing humans’ ability to gain sustenance from milk and establishing the early foundations of the dairy industry.

The international research, led by the University of Bristol and published today in Proceedings of the National Academy of Sciences (PNAS), deployed a pioneering technique to date dairy fat traces preserved in the walls of pottery vessels from the 54th Century BC. This method targets fatty acids from animal fat residues, making it uniquely suited to pinpointing the introduction of new foodstuffs in prehistoric times.

Lead author Dr Emmanuelle Casanova, who conducted the research while completing her PhD in archaeological chemistry at the University of Bristol, said: “It is amazing to be able to accurately date the very beginning of milk exploitation by humans in prehistoric times.

“The development of agropastoralism transformed prehistoric human diet by introducing new food commodities, such as milk and milk products, which continues to the present day.”

These settlers of South East, East, and West of Europe were the earliest Neolithic farming groups in Central Europe, known as the Linearbandkeramik (LBK) culture. The findings of this research showed some of the very first settlers in the region were using milk at scale. 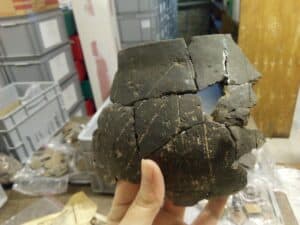 Part of an LBK ceramic pot used for food storage from the Colmar site in Alsace, France.
Credit: Emmanuelle Casanova

This work was part of the European Research Council (ERC) NeoMilk project led by Professor Richard Evershed FRS of the School of Chemistry at the University of Bristol. His team analysed more than 4,300 pottery vessels from 70 LBK settlements for their food residues. The results revealed considerable variation in milk use across the region, with only 65 percent sites presenting evidence of dairy fats in ceramics vessels, suggesting milk use, while common, was not universally adopted by these early farmers.

Focussing on the sites and ceramics with dairy residues, the researchers produced around 30 new radiocarbon dates to chart the advent of dairy exploitation by LBK farmers. These new dates correspond to the earliest LBK settlements during the middle of the 6th Millenium BC.

Co-lead author Professor Evershed said: “This research is hugely significant as it provides new insights into the timing of major changes in human food procurement practices, as they evolved across Europe. It provides clear evidence that dairy foods were in widespread circulation in the Early Neolithic, despite variations in the scale of activity.”

The study was conducted in collaboration with chemists from the University of Bristol and archaeologists from the Universities of Gdańsk, Paris 1, Strasbourg, Leiden, and Adam Mickiewicz, the Dobó István Castle Museum, Historic England, and the LVR-State Service for Archaeological Heritage, which directed excavations of the studied sites.