Sepsis is a deadly condition which takes the lives of some 50,000 people in the UK each year and affects 49 million people(1) worldwide. It occurs when the body’s response to an infection spirals rapidly out of control, injuring its own tissues and organs potentially resulting in shock, multiple organ failure and death.

Despite these figures, many people are still unaware of how serious sepsis is. September is Sepsis Awareness Month – with World Sepsis Day on 13th September – and it is a key time for our charity to spread the word about sepsis so that more people know how to spot the key symptoms so they can receive medical attention in time. Sepsis Research FEAT is the only UK charity that exists to fund research into sepsis alongside increasing awareness of the condition among the public and medical community. We have been running a variety of campaigns and activities throughout Sepsis Awareness Month to help in the fight against sepsis.

At the beginning of September, we launched a new national sepsis awareness campaign in partnership with the Scottish Government, our first joint campaign since the COVID-19 pandemic. The campaign aims to help save lives by increasing public awareness of sepsis and how to recognise the key symptoms.

The five key symptoms of sepsis highlighted are:

If someone has any of these symptoms, becoming noticeably worse, this could indicate sepsis and urgent medical attention should be sought.

Our campaign is running on billboards, posters, radio and via the first ever sepsis awareness ad on UK TV. This will be our largest campaign yet and will help us reach an even greater number of people and educate them about the symptoms of sepsis that everyone in Scotland should know about. We unveiled the campaign alongside the Scottish Government Health Secretary Humza Yousaf during a visit to the home of the ground-breaking GenOMICC research study at the University of Edinburgh’s Roslin Institute. 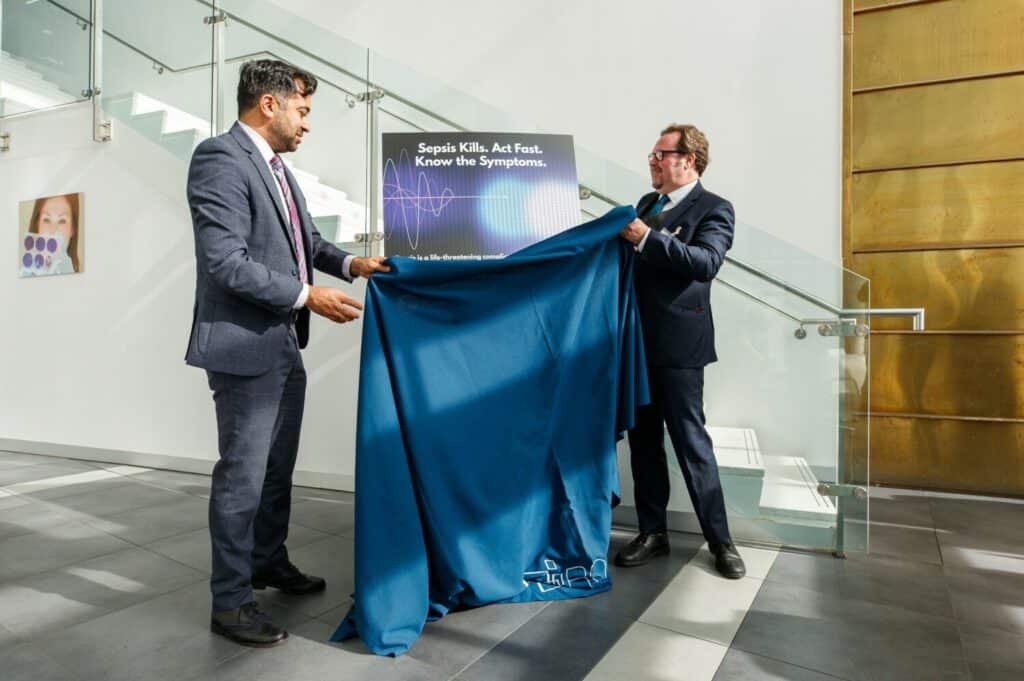 Genetics of Mortality in Critical Care (GenOMICC) is a global collaboration to study genetics in critical illness led by University of Edinburgh in partnership with Genomics England. It researches how genes can influence the body’s response to conditions such as sepsis and uses DNA samples from patients in over 200 intensive care units (ICUs) throughout the UK. To date, it has gathered over 19,400 DNA samples.

As a founding partner of the GenOMICC study in 2018, our charity has announced that it is extending funding to a new pilot study – GenOMICC Acute. Our investment will financially support GenOMICC to expand and accelerate recruitment to this pilot study in which additional blood samples will be obtained from patients shortly after ICU admission. The study will expand the number and type of blood samples taken and has the added pressure of sample collection within a time-critical window of 48 hours. The samples will help researchers gain insight into what happens within a patient’s body when they are at their most critically ill. It will provide invaluable data needed to improve treatments and optimise outcomes for sepsis patients. 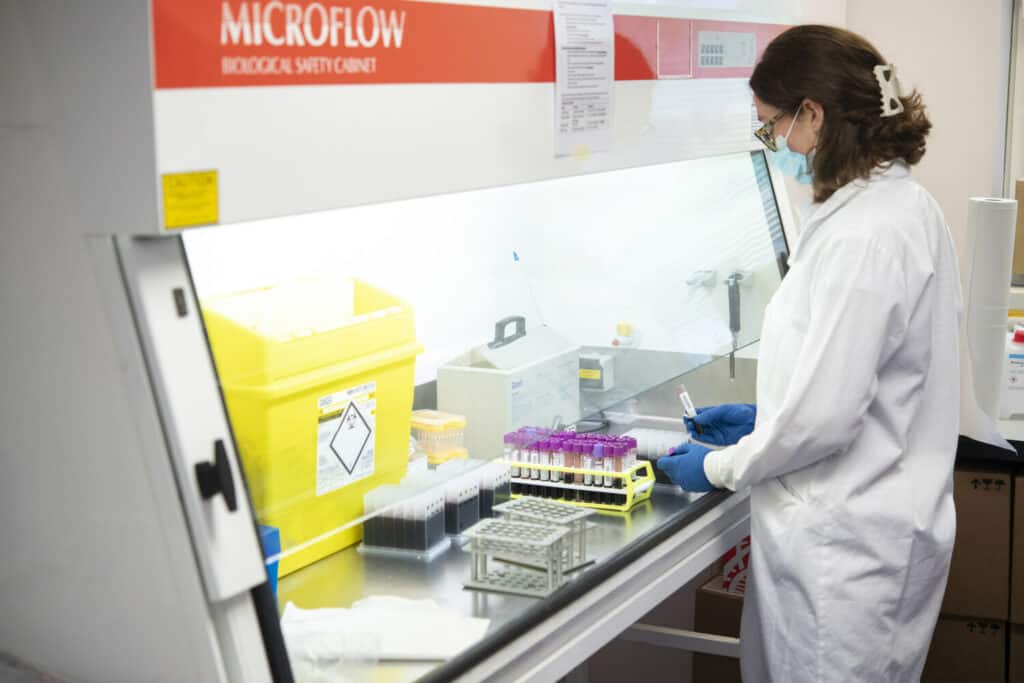 Sepsis Awareness Month is also a key time for Sepsis Research FEAT to raise funds for vital research and this year we are doing this through a fundraising campaign called Give us 5!. In order to highlight the five key symptoms of sepsis and also recognise the five lives tragically lost to sepsis every hour in the UK, we are asking supporters across the country to give five of something – this could be giving five minutes or hours of their time, taking part in a fundraising activity covering five miles on land or on water, or donating or raising £5, £500 or even £5,000.

The final strand of our charity’s activities this September is a brand new podcast series entitled Words of Sepsis. Across eight episodes, the podcasts will talk to those personally affected by sepsis about their experiences and the advice that they would give to others. The podcasts will also feature contributions from the charity’s chair, Craig Stobo, and GenOMICC chief investigator Professor Kenneth Baillie. The series will be available via Apple podcasts, Google podcasts and Spotify. We are confident that using this new platform will help to raise awareness of sepsis more powerfully than ever before. 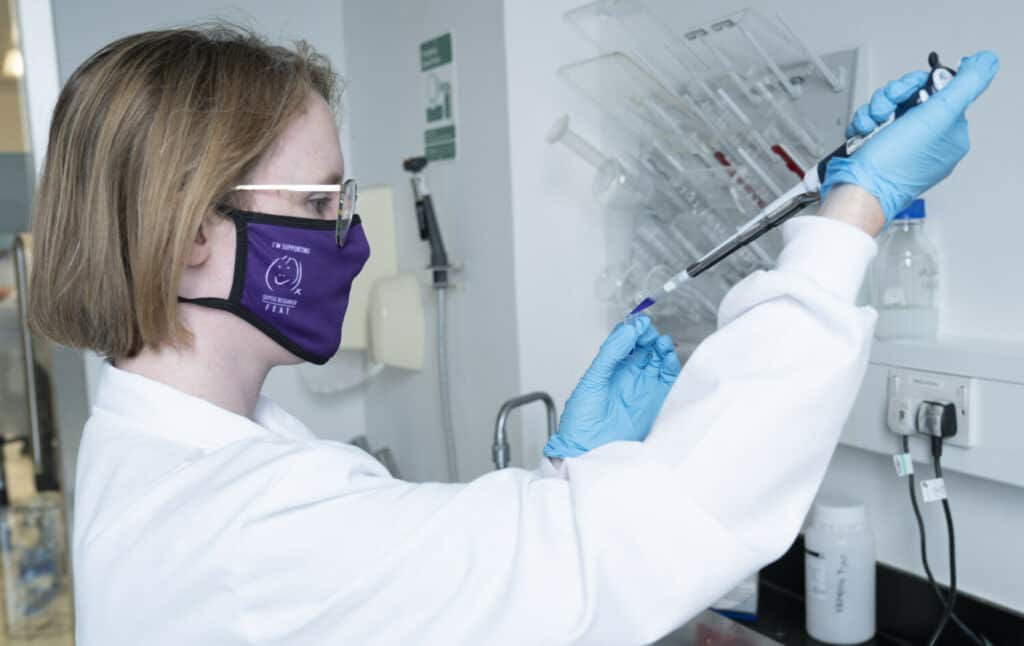 Sepsis Research visits the University of Edinburgh’s Roslin Institute. The Roslin Institute is home to the GenOMICC research study, led by Dr Kenneth Baillie, which researches how genes can influence the body’s response to conditions such as sepsis.

Find out more about Sepsis Awareness Month at sepsisresearch.org.uk/sepsis-awareness-month-2

Colin, a charity sector veteran with 21 years of experience, will be responsible for developing awareness of the charity and overseeing its fundraising and marketing strategy.

“Sepsis kills someone in Scotland every four hours. The annual death toll in Scotland alone is more than 4000 and across the UK it’s over 44,000.

“It’s a bigger killer than lung cancer and more people die from sepsis than the combined figure for breast cancer and bowel cancer. But unlike those diseases, there is no overall, clear picture ofthe risk factors associated with it and we urgently need to increase research funding.”

A tribute to Her Majesty The Queen

Gift Guide For Active Individuals Under £100