This devastating condition occurs when the body’s response to an infection spirals rapidly out of control, injuring its own tissues and organs which can result in multiple organ failure and death. The biological processes that cause sepsis are still not well understood, which is why more research is required to save lives. It is also vital that people learn the signs and symptoms of sepsis so they can seek medical attention in time.

Sepsis Research FEAT is the only UK sepsis charity dedicated both to funding research and to raising awareness of the condition among the public and medical community. September is Sepsis Awareness Month – with World Sepsis Day on 13th September – and the charity is marking it with various activities.

To coincide with Sepsis Awareness Month, Sepsis Research FEAT and the Scottish Government will launch their first joint campaign since before the COVID-19 pandemic. The nationwide multimedia campaign aims to help save lives by increasing the Scottish public’s awareness of sepsis and the five key symptoms: 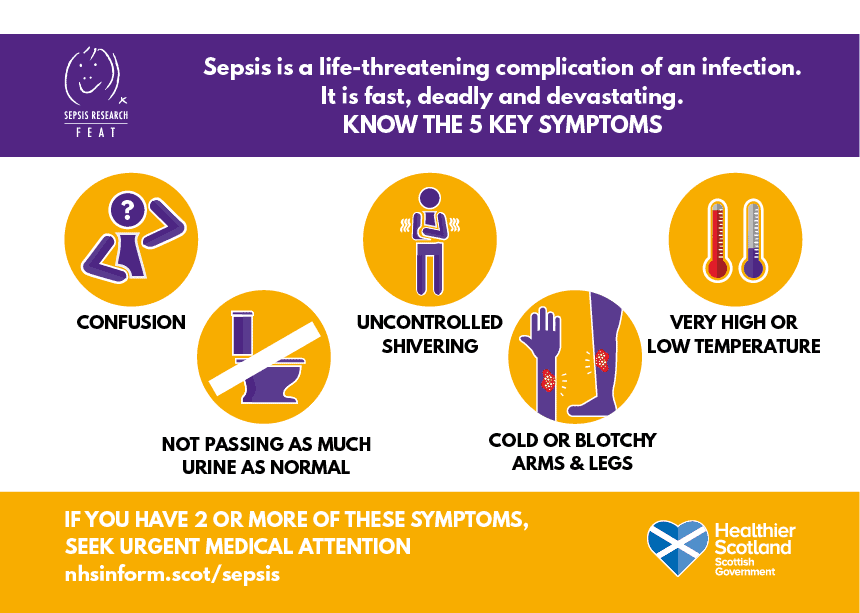 Sepsis Research FEAT representatives will visit the ground-breaking GenOMICC research study at the Roslin Institute to mark the start of Sepsis Awareness Month and celebrate a new pilot study, GenOMICC Acute, funded by the charity. GenOMICC is a global collaboration to study genetics in critical illness led by University of Edinburgh in partnership with Genomics England. It researches how genes can influence the body’s response to conditions such as sepsis, using DNA samples donated by patients in ICUs across the country, and has been supported by Sepsis Research FEAT investment since 2018.

Sepsis Research FEAT is launching a podcast series on 1st September. Over eight episodes, it will feature powerful stories told by sepsis survivors and their family members, along with advice from medical experts.

A new fundraising campaign for Sepsis Awareness Month 2022. In order to highlight the five key symptoms of sepsis and also recognise the five lives tragically lost to sepsis every hour in the UK, Sepsis Research FEAT is encouraging supporters across the country to give five of something – this could be giving five minutes or hours of their time, taking part in a fundraising activity covering five miles on land or on water, or giving £5, £500 or even £5,000.

Sepsis Research FEAT has charity spokespeople and medical experts who can provide comment on a number of topics including what sepsis is, how to spot the symptoms and the importance of research into this deadly condition.

Ben Fogle and The Big Mindful Chef Clean Up 2022