What if I told you we could decrease the mortality of lung cancer with one simple test?

To decrease these numbers, we need to acknowledge one of the underlying reasons for the high mortality rate of lung cancer worldwide: the diagnosis of lung cancer in late stages. Fewer than 1 in 6 lung cancers are diagnosed at Stage 1 and more than half are diagnosed at Stage 4 in the UK. Patients often experience no symptoms until the lung cancer has progressed to a more advanced stage when survival and treatment outcomes are poorer. Even for individuals who exhibit symptoms, these are often non-specific to lung cancer: coughing, chest pain, fatigue, weight loss, and breathlessness.

Since symptoms of lung cancer do not arise until later stages of disease progression, we need to screen high-risk individuals for lung cancer regularly to increase the likelihood of diagnosing tumours, if present, at earlier stages. In the US, where there is an established lung cancer screening programme, low dose computed tomography (LDCT) is used.  LDCT involves an X-ray machine taking multiple detailed images of the patient’s lungs with the help of a small dose of radiation.  The picture below shows a typical LDCT procedure. 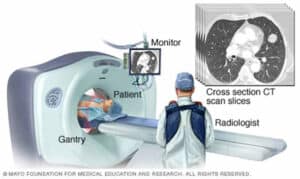 The American Lung Cancer Screening Initiative (ALCSI) is a non-profit organisation of over 200 doctors and students who are working to raise awareness of lung cancer and lung screening. We initially focused on doing so within the US, and now aim to reach more people at risk from lung cancer from across the world. Our organisation has worked with US Senators Tina Smith (D-Minn) and Marco Rubio (R-FIa.) to draft S.Res.462, which recognises November 2021 as National Lung Cancer Awareness Month and expresses support for the early detection and treatment of lung cancer. On November 30th, the US Senate passed S.Res.462 by unanimous consent, marking the second time the US Senate has ever recognised the importance of lung cancer screening. With the aim of having a global impact, team members at ALCSI have given over 200 presentations throughout the US, India, Mexico, Brazil, and UK; passed proclamations for November Lung Cancer Awareness Month in every single US state; are organising in-person lung cancer awareness campaigns in several communities; collaborating with doctors and hospitals to increase lung cancer screening ease of access for high-risk patients; started college chapters to engage students in outreach, advocacy, and legislative efforts; and are partnering with other organisations to raise awareness about lung cancer screening.

If you would like to learn more about lung cancer and lung cancer screening, please visit our website at www.alcsi.org. Please email us at [email protected] if you have any questions.

Sruthi Ranganathan is a medical student at the University of Cambridge, UK and a member of the American Lung Cancer Screening Initiative (ALCSI). She has contributed to raising awareness for lung cancer screening by reaching out to organizations, universities and schools in the UK and Singapore, and is also part of the ALCSI podcast team.  Outside of outreach work, Sruthi is passionate about cancer in general and has taken part in cancer research projects.

Alexandra Potter is a researcher at the Massachusetts General Hospital in Boston, MA. Her primary research focus is in the field of thoracic oncology, with a specific focus on lung cancer screening, and she performs clinical research. Ms. Potter has been the lead author on high-impact papers published in the British Medical Journal, JAMA Oncology, and Lancet Respiratory Medicine. She is also focused on raising awareness of lung cancer screening. She is the co-founder and President of the American Lung Cancer Screening Initiative, a 501(c)(3) non-profit, which has worked with communities across all 50 US states to teach people about the importance of lung cancer screening. She has also worked with US senators to co-draft resolutions, S.Res.780 and S.Res.426, recognizing November 2020 and 2021 as National Lung Cancer Awareness Month and expressing support for the early detection of lung cancer.

The American Lung Cancer Screening Initiative (ALCSI) is a 501(c)(3) nonprofit working to save lives from lung cancer by increasing awareness of and access to lung cancer screening among high-risk individuals. ALCSI is an all-volunteer organization composed of over 200 doctors and students in the United States, Canada, India, Mexico, Brazil, and Iran. In addition, ALCSI has chapters established at 25 universities across the United States. ALCSI has given over 150 presentations on lung cancer to a wide range of audiences, including students, community members, healthcare providers, community leaders, and policymakers. To date, ALCSI has directly taught over 10,000 individuals about lung cancer screening within the United States alone through community presentations. We have also worked with 133 mayors to issue proclamations for November Lung Cancer Awareness Month in every single U.S. state. Additionally, ALCSI has worked to increase awareness of lung cancer screening by partnering with YouTube channels to include lung cancer screening information in their videos. Thus far, ALCSI has reached over 7.5 million viewers on YouTube. In addition to ALCSI’s work with communities to increase awareness of screening, ALCSI has worked closely with policymakers to increase awareness of and access to screening. Last Fall, ALCSI worked with U.S. congress members and senators to draft and advocate for the first-ever House (H.R. 1192) and Senate (S.780) resolutions recognizing the importance of the early-detection of lung cancer through screening. In December 2020, the Senate Resolution ALCSI helped draft and advocate for was passed, marking the first time the U.S. Senate has ever recognized the importance of screening. ALCSI has also actively been working with Representative Brendan Boyle and Senator Tina Smith to draft and advocate for Katherine’s Law for Lung Cancer Early Detection and Survival Act of 2021 (H.R. 3749).

The Benefits of Oily Fish with Dietitian Claire