A new healthcare study has ranked the United Kingdom in 14th place in the world in terms of hospitals vs population ratio.

The study was conducted by Radar Healthcare as part of the Healthcare Mapped report. The study has taken a seed list of the 33 most developed countries in the world, and has utilised multiple ranking factors to give them an overall score for the quality of their healthcare systems. One of the data points analysed for each individual country was their hospital vs population percentage ratio.

The UK has been ranked in 14th place out of the 33 countries for hospital vs population ratio. With 1,978 hospitals across the four nations that make up the UK, and a total population of 68,497,907, the UK has a hospitals vs population percentage ratio of 0.29%.

The list of the top 20 countries ranked on their number of hospitals vs population ratio can be found below:

Healthcare systems differ all over the world, with some providing high-quality services for free, and others causing people to quickly rack up thousands in medical bills. So, does paying for healthcare mean that you are guaranteed a better service, or are free healthcare systems just as reliable?

In order to delve into how simple differences between the way that healthcare systems are implemented around the world can have huge impacts on the quality of results and level of care, Radar Healthcare have carried out research in order to create their brand new Healthcare Mapped report. 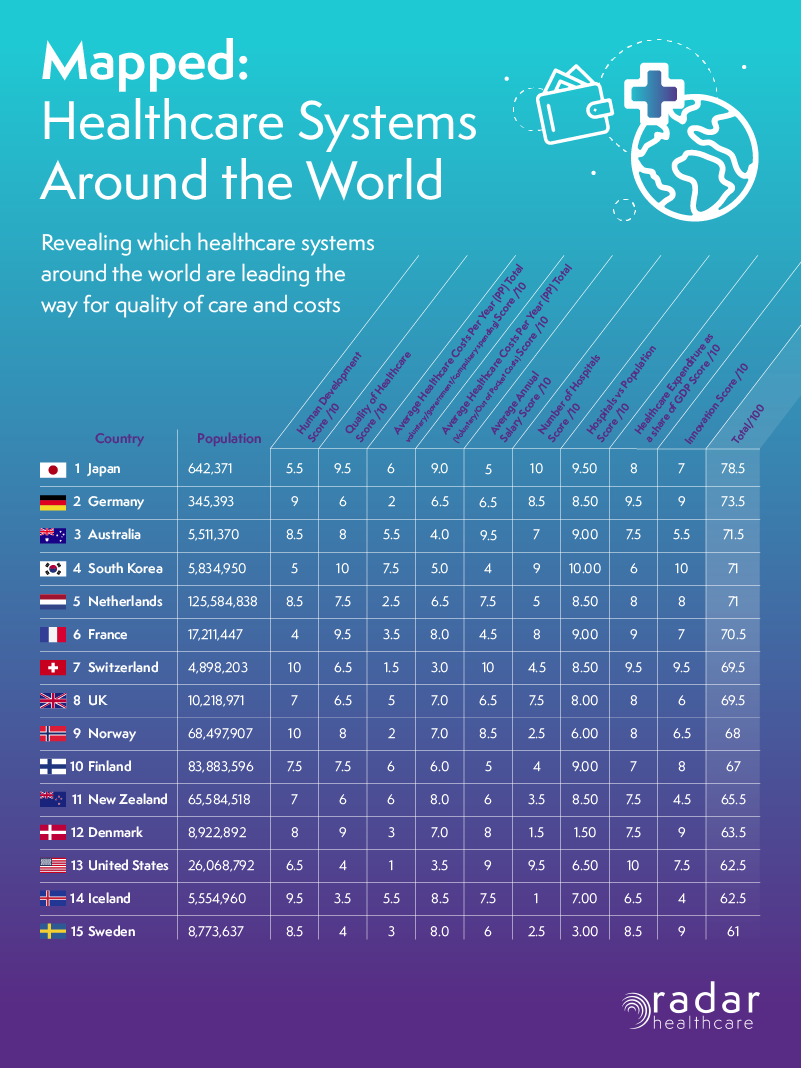 Overall, the standout country emerged as Japan when it came to exemplary healthcare services. In total, Japan achieved a very impressive score of 78.5/100.

In second place came Germany, with a very respectable score of 73.5/100. Hailed as the second-most progressive country in the world, this is not surprising. The nation’s exemplary ranking was aided by a 9/10 human development score, which refers to how many people live long and healthy lives, have a decent standard of living and achieve a wealth of knowledge.

A fairly low score when it came to average voluntary healthcare costs per person (£796 per year) meant Germany walked away with 9/10 in this category too, proving them to be a very worthy second place holder.

In third place was Australia, scoring a commendable 71.5/100 overall. The nation ranked 8/10 for their overall quality of healthcare, along with a reputable 7/10 when it came to their average salary vs cost of healthcare statistics, with 3.15% of the average £38,889.91 salary going towards healthcare per year.

Despite a large population of almost 69 million residents, the United Kingdom managed to achieve a respectable joint 7th place in the overall report, with a score of 69.5/100 – the same as Switzerland. *The UK data groups together data from England, Scotland, Wales, and Northern Ireland. Where data was incomplete for NI, this was omitted from the index ranking.

Considering how densely populated the UK is as a nation compared with Switzerland, alongside the well reported strains and pressures the NHS is under during the past few years, this overall score for the UK as a whole is commendable, if still highlighting the room for improvement in terms of healthcare quality.

Chloe Weatherhead, Head of Customer Experience at Radar Healthcare says: “Overall, there are numerous factors that have an impact on the efficiency of healthcare systems across the globe, such as financial and humanitarian crises, high population density, low salaries, and so on.

“The huge steps that have been made, with regards to healthcare related technology innovation within the last few years alone, is already having a hugely positive impact on quality and safety, and improving outcomes and overall experiences for all kinds of patients.

“Learning and taking inspiration from impressive international healthcare systems, such as those found in Japan, could certainly be a wise move for those wary of embracing ever-evolving technological advancements. Ultimately, the best way to tackle the ongoing challenges healthcare systems around the globe continue to face is to drive improvements by learning from one another.

“When it comes to the UK in particular, it’s reasonable to note that it could be beneficial to focus on upgrading to more advanced technological processes, that hep to create a culture of learning by empowering healthcare staff with information to support quicker decision making and more open methods of communication.

“It’s also worth noting how access to national health-related data can have a hugely significant learning impact. For example, the new LFPSE (Learn from patient safety events) service – which are currently in the final stages of development – will act to give healthcare workers a more holistic and wider view of national data, in order to see what’s working well and what’s not up and down the UK.”