The drug candidate, which was developed by a University of Queensland research team, uses a molecule found in the venom of the K’gari (Fraser Island) funnel web spider, and can potentially prevent damage caused by heart attacks and stroke. 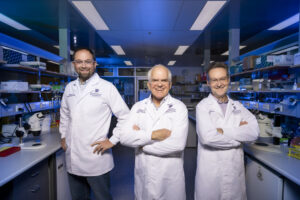 It will now be able to progress to clinical trials after UQ’s commercialisation company UniQuest licenced the drug candidate, IB001, to Brisbane start-up company Infensa Bioscience.

UQ Principal Research Fellow and Infensa CEO, Associate Professor Mark Smythe, said there are currently no drugs in clinical use that prevent damage caused by heart attack, which is the leading cause of death worldwide.

“The heart can’t regenerate muscle cells that die during a heart attack, which is why these injuries cause permanent damage and can lead to heart failure, disability and reduced quality of life,” Dr Smythe said.

“IB001 blocks the signals that causes heart cells to die, and when given immediately to heart attack victims could reduce damage to the heart and significantly improve outcomes for people with heart disease, particularly in rural and remote regions.”

Professor Glenn King and Associate Professor Nathan Palpant from UQ’s Institute for Molecular Bioscience discovered last year that the drug candidate prevented cell death caused by loss of oxygen to the heart and brain during heart attacks and stroke.

The drug candidate was developed in collaboration with Professor Peter Macdonald from the Victor Chang Cardiac Research Institute and Professor Rob Widdop at Monash University.

Dr Smythe said the $23 million funding would go towards the drug’s development and establishing the company.

“Infensa Bioscience hopes to start Phase I clinical trials as a heart attack treatment in Queensland next year,” he said.

“This is a game-changing technology that could have world-wide impacts and is being developed and funded right here in Australia.”

“It’s been some time since there was such innovation in this field, and we look forward to seeing how this exciting program of work can support sufferers of heart disease,” Dr Moss said.

The company also plans to raise additional funds to support the development of drugs to treat stroke and extend the life of donor hearts used for organ transplants.

The name Infensa is drawn from the scientific name of the K’gari funnel-web spider, Hadronyche infensa, which is known by the local Butchulla people as mudjar nhiling guran (“long-toothed spider”).

The original research was published in Circulation.