The charity Leukaemia Care today welcomes the news from the National Institute for Health and Care Excellence that a new cancer treatment drug asciminib has been approved for NHS use in chronic myeloid leukaemia (CML) patients after two or more tyrosine kinase inhibitors (TKIs).

Leukaemia Care submitted evidence to NICE advocating for the approval of asciminib before the decision was made. By being a consulted patient organisation in the process, the charity were able to contribute patient opinions, evidence and experiences advocating for access to this important treatment.

Chronic myeloid leukaemia (CML) is a cancer that was once fatal, unless a patient was fit enough for bone marrow or stem cell transplant. Transplantation is only suitable for the fittest patients, and comes with significant side effects including infection. Asciminib is the latest in the line of treatments that changed this for the better. It is a tyrosine kinase inhibitor (TKI) that targets and kills cancer cells allowing treatments to bind to a protein. The first CML TKI, dubbed a ‘golden bullet’ treatment, was called Imatinib and turned CML from a fatal cancer into a long term illness. Over the years, four other TKIs have been developed including bosutinib, ponatinib, dasatinib and nilotinib. Essentially this means that patients need only take a tablet a day to keep the leukaemia cells at bay.

Now with patients increasingly being told they are likely to live a near-normal life expectancy, the estimated 25 per cent of CML patients who do not respond to the treatments wondered what was left for them.

This has led to the development of asciminib, a sixth TKI, which is set apart from the rest as it binds to a different part of the target protein, meaning it is often effective in people who are resistant to other treatments. Some CML cells can edit the target protein in a way that stops the original TKIs binding as well, causing the TKIs to stop working. Because asciminib binds to a different part of the protein, it even works on CML cells with the altered protein.

While TKIs have saved many lives, they come with side effects with fatigue being a common one. Fatigue can be hard to treat, leaving many unable to work as a result. Asciminib represents a chance for these patients to try a TKI that may not have the same side effects and give them a chance to engage with everyday activities. 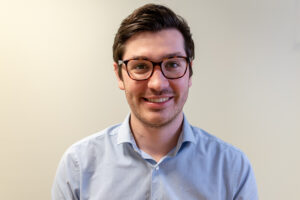 Chief Executive of Leukaemia Care Zack Pembleton-Whitey, said: “Leukaemia Care welcomes the approval of asciminib by NICE, providing an additional treatment option for CML patients. We are pleased to have been involved throughout NICE’s process to make asciminib available on the NHS in England. Having access to a treatment which works differently from other CML treatments is an exciting advancement and will be welcome news for many patients and their families.”

However, Leukaemia Care would like to see this treatment be more widely available for patients in the future, such as it being an option that doctors and patients can use earlier on, without a patient needing to try as many as two previous drugs beforehand.

This announcement comes as the charity sector awaits a response from the Secretary of State for Health and Social Care on his plans for a new 10 year cancer plan. One of the ambitions of the plan is to increase access to personalised care. Drugs that improve both quality of life and increase options for patients, such as asciminib, are set to play a role in this ambition.

The Importance of Using an Eco-Friendly Washing Detergent